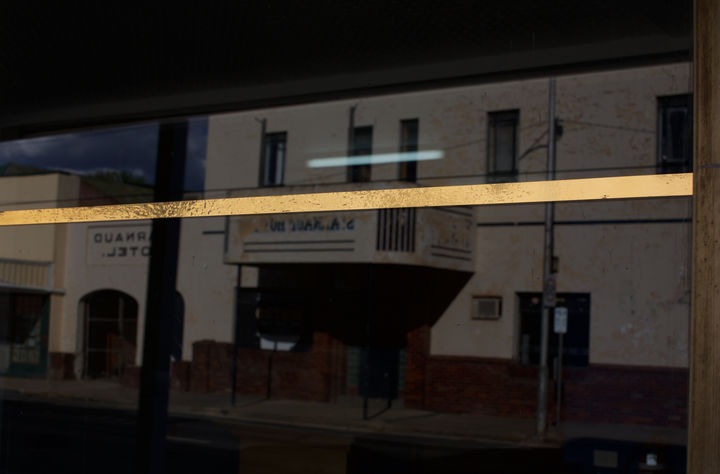 Low on the shiny window of the Independent Grocer’s opposite the St Arnaud Town Hall, a slender line of gold begins and then extends across several other shopfronts. If you follow it with your finger, you track its slow rise up, up, upwards, until you’re straining to be able to reach it at all. In 1924, this was the height reached by the great flood that overwhelmed the town when hapless goldminers hit a vast watertable. Today, each shopfront exhibits a work by James Geurts that inaugurates the St Arnaud Street Museum.

Floodwaters sweep away the order of a street, recreating its culture as a suspended disarray. They move fast; they rest slow and dank and dangerous; they recede, leaving an uncanny filth that distresses recovery efforts. Floodwaters filled with both gold and arsenic swept St Arnaud, creating a temporary suspension above ground and a permanent one below.

Water resets our expectations. Reflection offers a perspective on difference, while refraction changes that perspective. Above the surface we see a small and often misleading proportion of the floating object; we can only see its true form below the surface if we immerse ourselves. Refraction casts a different shape, and that immersion was key to the artist’s approach. Geurts identifies two “pivot points” for his process: the flood mark and the shaft lines. Watertable’s biggest work is a drawing of overwhelming scale that depicts the structure of the eleven mineshafts against the topography of the region. Geurts made his drawings onsite, working at the mines’ locations as both a research and an imagining. He then expresses that license in the monochrome’s sinews that arrests the eye: the clarity of purpose in the built shafts interrupting the landscape; the meandering parallels of the groundforms; the subtle use of colour and gold that invites and rewards the extended focus.

Water is gold, but floodwaters are perilous. For any Wimmera town, water is precious ”“ more precious than the gold beneath their feet, which is now too cost-ineffective to mine. A street museum proposes something new for both the street and the museum: for the street as familiar space, and for the museum as cultural institution. A museum is an exercise in custodianship, collection and curation. Its work is the identification of cultural artefacts reinterpreted and re-presented. The main street of a small town plays an equally vital custodial role as a central place for encounter and exchange.