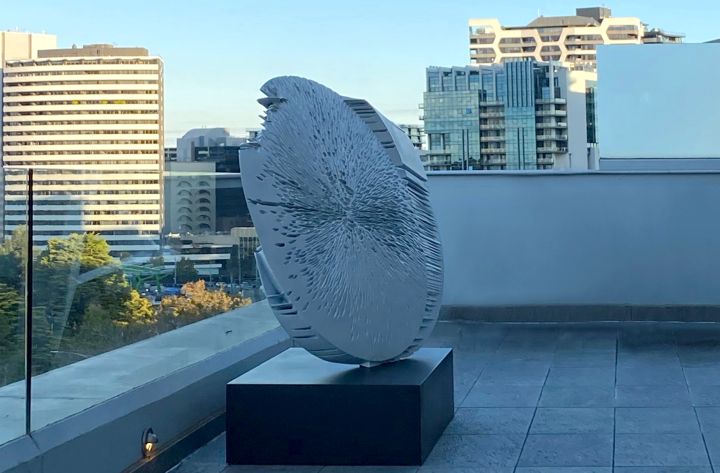 EON project is a site-responsive series of sculptures exploring the perception of time, connecting the primordial with the technological, from evidence of the earliest forms of multi-cellular life to the proliferation of satellite mega-constellations which orbit the earth. The crystalline structures of the satellite sculptures evoke the fracturing of linear time, warping and transitioning as evolving interfaces of relayed information.

Do we measure time or is time being measured? In his investigations into the phenomenology of time consciousness and motion”“weather tracing internal water structures, frequencies, information exchange, perception and the origins of the earliest forms of multi-cellular life”“ interdisciplinary artist James Geurts reveals the gravitational interactions between time and measurement. Shadowing phenomenologist Edmund Husserl’s statement that: “every perceived time is perceived as a past which terminates in the present, the present being the boundary- point,” Geurts’ interrupts both the present and the perceived past to create a new demarcation and a new visual field of consciousness.'
Extract from forthcoming essay by Melissa Bianca Amore