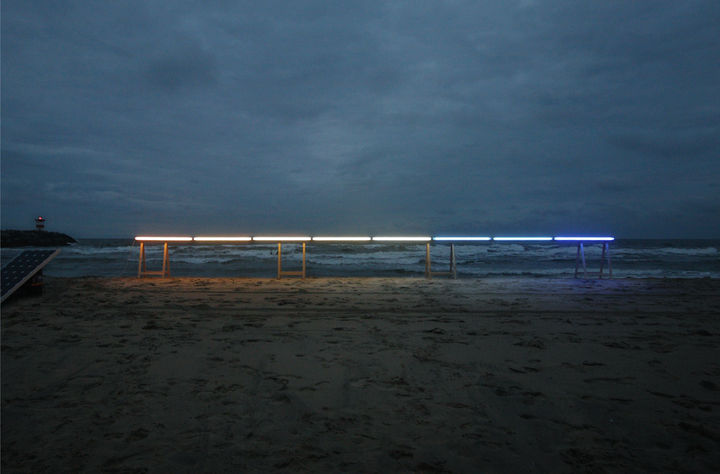 Action: Solar energy was collected through the day of the action, to power 8 florescent tubes in a long line. The audience were positioned to align the sculpture optically with the oceanic horizon, which took place on the Dutch coast facing North across the North Sea at dusk. The sculpture was Illuminated at the exact point the sun visibly vanished from the horizon for 8 minutes 20 seconds, the time it takes for sunlight to travel from the Sun to the Earth, and the human retina, to repeat the phenomena of this afterglow. The fluorescent tubes were graded from warmest temperature (closest to the sun setting) to the coolest temperature.

James Geurts is interested in the relationship between inner and outer horizons, expressed most simply : the outer horizon line between land or sea and sky ; and the inner horizon of perception. Of course, as the artist points out above, the outer is a product of the inner, as no physical horizon line actually exists, rather it is an imaginary line, interpreted by the eye. This statement takes nothing away from the reality of horizons, when we acknowledge that we live, in great part, through that combination of sensing and thinking that we call the imagination. Beyond the tangible nature of our immaterial imagination, when we pursue a journey into the ways in which the inner is drawn through and from the outer, we arrive at a threshold where the bounds of metaphysics and physicality themselves are blurred. Here, we encounter a deep belonging, where metaphor and phenomenon emerge from the same source, and so to what might be described as the alchemy of perception and materiality. I could also describe this as an emergence, through thresholds, into the dynamic flow of all thing.

This brings me to another correspondence between inner and outer horizons, existing in the beautiful biology of three semi-circular canals in the inner ear. These organic forms contain a fluid whose level is adjusted by the body when the head tilts or moves. As our orientation changes, the horizon lines of seascape or landscape alters, and so our inner equilibrium, this tidal horizon, adjusts. In still another simultaneous echoing and dawning, just as line in Geurts’ work refers to circulation – so it is through semi-circles that our body’s line of vision is maintained. The combination of circulating energy and line is further amplified by the document of Geurt’s creation of an ephemeral horizon line in a solar light installation, across sunset on a beach in The Hague. ‘Energy can be changed from one form to another, but it cannot be created or destroyed.’