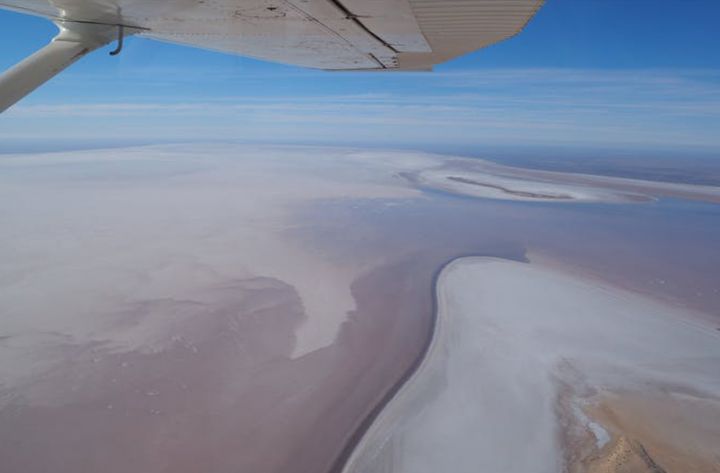 THE SATELLITE AND THE SALT LAKE is a site action using a light aircraft and video camera. A door was taken off the aircraft to facilitate the vertical video recording of a conceptual line across Lake Frome, a dry salt lake in the Flinders Ranges South Australia. This action redraws the orbital arc of NASA's first Millenium Program Earth Observing-1 (EO-1) satellite in 2000: an experimental hyperspectral sensor engineered for data mapping and monitoring. Lake Frome was chosen by NASA due to being the brightest area on earth when viewed from space, a distinct area of salt crust with variable densities that expands the range of spectral information.

THE SATELLITE AND THE SALT LAKE is an analogue video drawing that focuses on a psychological response to site, in contrast with the current imperatives in use value of landscape and data collection for mining purposes. The position of the video camera captures the unique prism optics in the layers of salt and creates a phenomenon known as the stroboscopic effect.