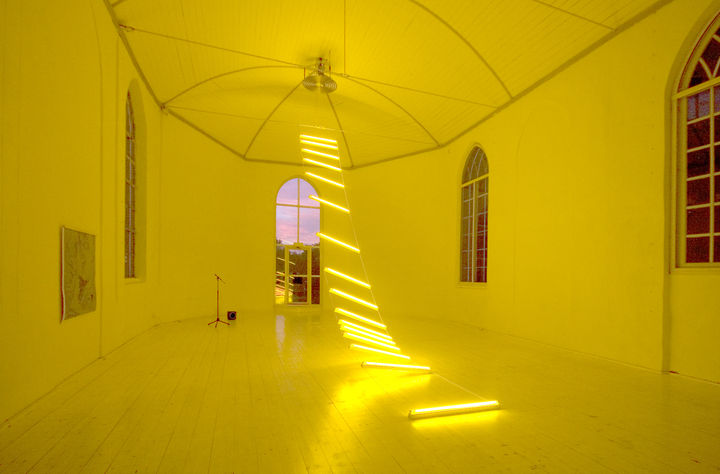 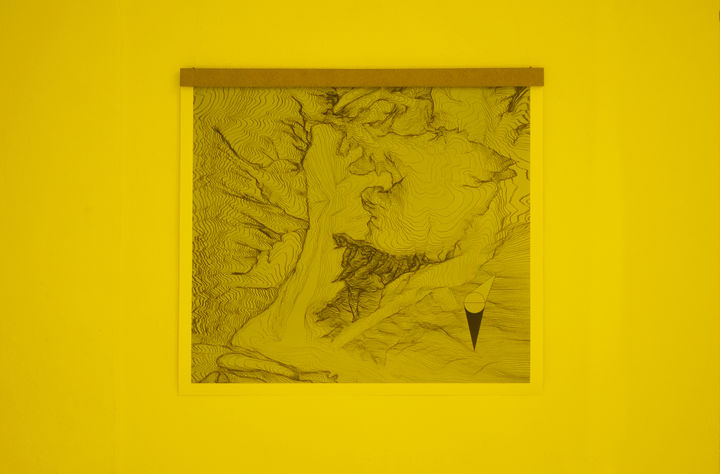 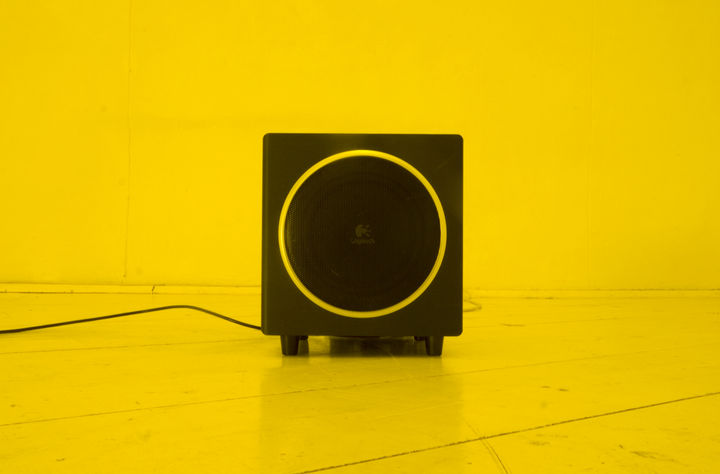 Standing Wave: Drawing Resonance
A line of yellow florescent tubes trace the path of standing wave frequency throughout the chapel space, based on the resounding 76 Hertz frequency of the chapel.

In a subtle and evocative way, the qualities of human life and physical landscape in and around Hoorn are stirred in Geurts’ project Standing Wave: Drawing Resonance I. A standing wave is a phenomenon produced when the particular frequency holds an equal harmonic resonance. A sound wave flowing outwardly is resonant with the same shaped sound wave flowing inwardly. In this case an architectural space, the chapel. The ensemble of characteristics proper to any given built space ”“ its geometry, volume, surfaces, densities and depths ”“ influence this event. Experiments in the chapel revealed that this corresponds to a frequency of 76HZ. One wavelength becomes two as it reflects itself in the architecture, seeming amplified in the process, and generating a resonance that is palpable. In the exhibition a single sound source at the far end of the space becomes doubled, not only in sound, but also by a large-scale light installation in the form of a wave. Geurts has used a staple material of his practice ”“ a series of fluorescent tubes, yellow in this instance, to create the wave suspended high in the main body of the chapel. Moving around the space, the waves of light and sound resonate each through the other. Their volume and intensity shifts depending on the body’s alignment. This draws the visitor into the conversation, activating her physicality and the internal frequencies and rhythms that course through it, now perceptibly.

This physical resonance in internal and external space stirs other associations with place. Light is the fluid medium of time and perception itself. there is a sense in which the archetypal use of light (the wave) stirs the latent presence of this invisible history. The abstraction and minimalism of the exhibition offer the body a space of reflection and immanence outside of prescribed codes and values.

Context comes in too in allusions to waveforms. Physical resonance is revealed through the standing waves. Yet, waves are also left standing, metaphorically speaking, when seas are blocked in. In Hoorn, this produces what Geurts refers to as a ”˜phantom tide’; the tide lingers in the collective psyche, yet no longer manifests in geography. Mysteriously, in this case, the pre-existing Hoorn tide is still recorded on many meteorological sites as a presently existing force.